After finishing her university degree in geography and urban planning, Nancy began working for the federal government in Ottawa, designing exhibits and trade Fairs. At that point, Nancy never imagined that she would use these business and people skills for her future career in real estate. With a background in urban planning, construction and renovation, her vast experience and knowledge has allowed her to assist clients in envisioning potential renovations in their future home. When it comes to visualizing, Nancy has always had a knack for helping clients see the potential in their new space, whether it is a condominium, apartment or older home in one of the established neighborhoods throughout the city.

As a realtor with 30 + years of experience, Nancy operates a full service office at RE/MAX Hallmark Realty in Ottawa Ontario.  RE/MAX has offices throughout Ontario and International offices in most countries throughout the world.

As one of Canada’s Top Realtors she attributes her success to her ability to match buyers with just the right property. For her seller clients what sets Nancy apart from other realtors is the elegant and professional way she markets properties. Nancy and her associates pride themselves on their unique presentation and marketing skills.

Her clientele is primarily Foreign Services Officers, Military, RCMP and young urban professionals. Nancy also provides planning services for those soon to retire who are looking for a country retreat, a winter property in the south, or a cottage closer to home so that they can enjoy their retirement to the fullest. She is able to provide contacts through her vast network of colleagues and professional throughout the world! As a consistent top producer in her field with numerous awards for marketing and sales, Nancy is the go-to realtor for your next real estate venture.

Brookfield works with entities that include the Government of Canada, the Canadian Forces and the RCMP, offering assistance in relocating to new work locations. TheMIGroup is a relocation management company for the global corporate community. Many of Nancy’s clients have been referred by these organizations.

When she isn’t showing or selling homes for clients, you’ll often find Nancy involved in her other passion: equestrian showjumping. Nancy first became involved in the sport in her teens, and after putting it on hold while she established he real estate career, she returned to showjumping more than a decade ago. She has participated in showjumping in the U.S. and Canada and has ranked in the top placings at numerous international events.

A glance at the results of the low adult jumper and masters jumper division at the Winter Equestrian Festival (WEF) as well as the amateur jumper classes at major Ontario tournaments shows Canadian rider Nancy Benson peppered among the top placings. This busy Ottawa native manages a hectic career as a real estate agent buying and selling “unique urban properties” interspersed with traveling a daunting number of miles every week to train and show her horses.

Benson began riding hunters in her teens, coached by Robert Meilsoe. But after graduating, the reality of realty dictated that she give up horses for the next 20 years while she built her business. About 16 years ago, she felt she needed a change from skiing and a few other pursuits, but longed to return to her first love. She purchased a couple of prospects and decided that if she was taking another shot at the sport, she would get serious. “Rather than keeping my horses here in Ottawa, I moved them to Torrey Pines (in Schomberg) so I could train with Eric Lamaze and Courtney Vince. Mostly I did hunter at first with Courtney and bought and sold a few horses through Eric.” Her two current horses – Joli Coeur and Quannan De Bray – were imported from Europe through Lamaze and Vince’s overseas connections. Joli Coeur (known as Cracker in the barn) is a 19-year-old chestnut Selle Francais gelding. “He is sort of the barn pet,” says Benson. Quannan De Bray (nicknamed Britain) is a 13-year-old bay Belgian Sport Horse gelding that came from Michael Whitaker’s barn. His sire, Kannan, was a talented member of the French jumping team who was named French national champion in 2005.

Following the Beijing Olympics, Lamaze and Vince became stationed primarily in Europe, so Benson decided to move on. She relocated her horses to Yann Candele’s Normandy Hills Farm in Caledon. As he used to work with Lamaze, it seemed like a natural progression, although one of Benson’s horses was faced with a career change. “I showed Cracker three times at the Royal in the hunter division and he won lots of stuff over the years. But Yann’s really isn’t a hunter barn, so my hunter became a jumper and actually does much better as a jumper!” Throughout the years at the Winter Equestrian Festival in Wellington, Florida, Benson packs a one-two punch with both horses in the low adult division and was regularly champion or reserve with one or the other, or both. “I’ve been lucky – I’m getting some really good schooling in the jumper division, and the horses like me!” she says, adding that while she doesn’t have children, “my “kids” are the Benson Boys – that’s what they call them at the barn.”

The logistics of working, riding and showing (not to mention home life with hubby Bill Stanyar) requires a precision balancing act from Benson. “Every week I fly to Toronto; I basically ride one afternoon, ride the next day and come back,” she explains. After years of commuting, she has it down to a fine art. “I can leave my desk (in downtown Ottawa) and get to the barn faster than someone coming from Bay and Bloor in Toronto.”

On winter weekends, the 59-year-old Benson flies back and forth to Florida for WEF. “The idea was to have a holiday in the winter and a bit of a break from real estate.” That “break” is open to interpretation, however. “I’m usually not away for more than three or four days at a time, and I have a full office set up in Florida and in Toronto as well. Typically, I work in the morning and ride in the afternoon, or vice versa.” Thanks to the internet and a team of four assistants to make sure things continue to work seamlessly, she is able to make appointments, set up tours and manage her business from any location. “I also do referral work with agents in Florida for horsey people who are looking for places, rentals or purchases.”

While in Wellington, Benson keeps her horses with Melissandra Lincourt who is Grand Prix rider on the Canadian Show Jumping Circuit. The Vince’s Linden Ridge Stables is Benson’s new training facility in Burlington, Ontario and she continues to Florida with them for the winter months. “The horses go down in early November and come back end of April,” says Benson, who usually manages to do eight or nine shows during the 12-week tournament.

Benson is pragmatic about the amount of life-juggling effort it takes to keep all the balls in the air. “I guess it comes naturally, as I have been doing this balancing act for 15 years or so. It takes a lot of planning and organization to ensure that my work runs smoothly and that my clients never think that I am out of the office. Technology now allows me to follow both passions – real estate and show jumping.”. 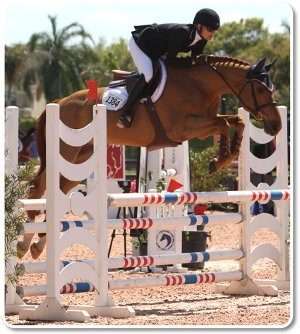 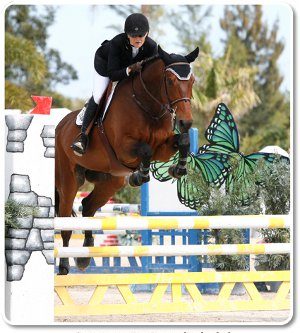 In recent years, because of Nancy's steadily growing sales and the needs of an office that is working with dozens of sellers and buyers at any given time, Nancy's team has grown and diversified in order to ensure outstanding service to our clients.
Meet the Team!